I try Aikido (and earned a white belt!) 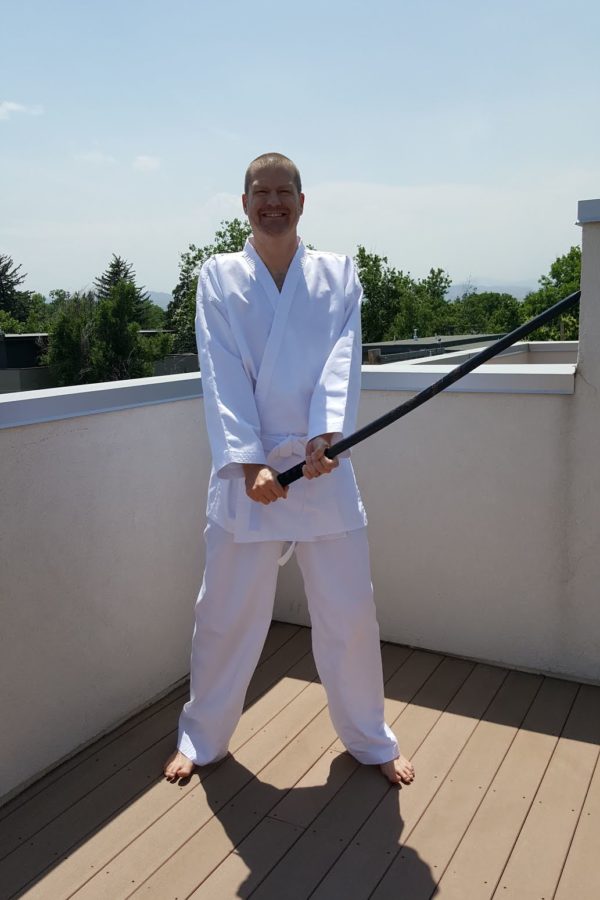 I knew very little about Japanese culture or philosophy when I found the book Art of Peace by Morihei Ueshiba (1883-1969). I consider myself a student of the eastern philosophical Taoism with a decent library of books and even a favorite version of the Tao Te Ching. It is hard to study any Chinese philosophy or religion without crossing over into other areas giving me a passing understanding of Confucianism and Buddhism. The Art of Peace was my first meaningful excursion into Japanese thought and I fell in love immediately.

The Art of Peace outlines a nonviolent approach to conflict, contrasting Sun Tzu’s Art of War, with the goal that those at odds find peace and mutual benefit in the resolution. Morihei Ueshiba is best known as the founder of the martial art Aikido. Inspired by The Art of Peace, a growing fascination with Japanese culture, the desire to find a fun activity my wife and I could do together and thinking I would look super awesome in a karate outfit, I found a traditional Aikido dojo whose sensei was a student of Morihei Ueshiba and signed up for a six-week beginner class.

Since picking up Art of Peace and starting the class, I began a deep dive into the philosophies and belief system associated with the samurai cultural tradition in which Aikido evolved. Aikido is unique in that it did not become a sport or competition. Instead, you work with a partner taking turns “blending” (aiki roughly translates into join together or meet) with one person initiating the attack “uke” and the other responding “tori.” In Aikido you work with your partner to perfect techniques “kata” using the others energy to repeal the attack safely resolving the conflict.

Aikido is also designed to cultivate life energy or “ki.” From my reading ki is, more or less, the Japanese version of “chi” adapted when Taoism was imported to Japan and is the energy used in traditional healing approaches like acupuncture and the practice of tai chi. I relate chi and ki to the biochemical functioning of our body and brain where we use bioelectricity of neurons (brain cells) to guide conscious and unconscious bodily functions and actions.  Aikido checked off a bunch of my boxes including my study of Taoism, nonviolent philosophy, focus on the science and spiritual aspects of energy in the body, and something my wife was interested in as well.

I go to the dojo. I’m a basketball guy and tried to avoid the wrestling mat throughout high school. Falling, rolling, and continuously getting up made me aware that I had many muscles I never used before in my life! Forget cultivating ki; my sore muscles dominated my awareness. But we had a blast, our teacher was great, the senior students were patient partners, and our fellow beginner seemed drawn to the same aspects of Aikido that I found fascinating. By the time we got to weapons training, I was hooked!

In my nerdy way, I love learning about the history and culture of Japan. From the Shinto religion to the influence and role of the samurai, a unique and fascinating culture emerged that could only do so on a mostly isolated island. Practicing an art form with over a thousand years of tradition is fun physically and intellectually. I also love that the dojo is far from a typical gym. Membership is as much about service in the community (they focus on homelessness) as what you do on the mat. While my front roll is terrible, and my flexibility still needs work, I love finding a new way to focus my physical, mental, and spiritual energy. Plus, you get to play with swords (or at least wooden versions)!