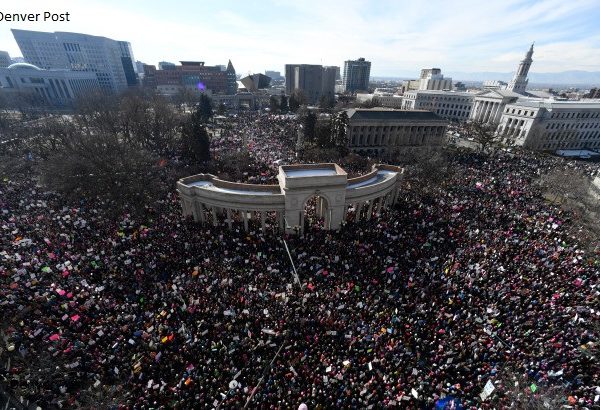 I spent Inauguration Day blaring Nine Inch Nails trying to transform my fear into some good old Gen-X angst hoping that this familiar state could get me through my fear. The next day I was headed to the 2017 Women’s March. Over my years in Denver, I have participated in dozens of social justice protests and marches. Most of the time it was me, a few other concerned folks, people from the American Friends Service Committee, and a dozen or so members from other organizations.

The morning of the Women’s March I assumed I would see my old friends and maybe a few other people who felt like I did would show up as well. When I arrived, there was already a couple of hundred people there. I was thrilled!

Then, something that I thought would resemble my previous experiences turned into one of the most compelling experiences of my life. THOUSANDS of people started streaming into Civic Center Park in Downtown Denver. My first thought was, “Wow this is going to be even bigger than the 4-20 marijuana demonstration/celebration!” Then tens of thousands of more people filled in the entire park. Being 6’7, I had a fantastic view of all of this happening. Women in pink pussy hats, young children with signs, and a whole bunch of guys supporting the movement.

The energy was almost overwhelming. Imagine having goose bump so powerful that they feel like they are going to explode! Then it seemed like something went wrong. A half-hour after the March was supposed to start we hadn’t moved. An hour after it started, we had maybe moved up 20 yards. Almost at the two-hour point, I saw a young lady walking the opposite direction with a smile on her face. I asked, “are you giving up?”

“Oh no, we marched the mile and are coming back for the rally!”

It was then that the magnitude of the movement hit me. Not only was the vast park packed, but there were so many people that tens of thousands had already completed the March while around 100,000 of us were waiting for our turn. It was the movement I realized that I was not at a March. Instead, I was a part of history.

There was no way any of us at last year’s march could predict the “Me Too,” Indivisible, or other movements that pulled energy from that day. However, everyone I talked to knew that we were at the beginning of something transformational. While we all manifested this energy in different ways, in the darker and more depressing moments of the last year, all I had to do is think back to the 100+ thousand friends, and my fear quickly turned into motivation to keep fighting the good fight.

Like last year, I have no idea what to expect out of this year’s March. However, it is essential for those of us who care about those we serve, the environment, social justice, quality public education, and healthcare as a human right to show up. Millions of us making our voice heard will have an impact in ways no one reading this can begin to imagine.