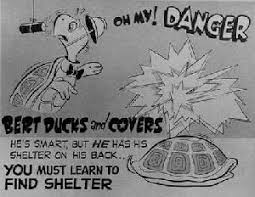 You cannot understand me or many of my generation without taking into consideration the psychological impact of growing up under the constant threat of nuclear Armageddon. I was an anxious and scared kid at times; I grew up knowing that at any moment the news might come on the television that the missiles were in the air and death was imminent. Our shared childhood trauma followed us to school in the form of duck and cover drills, at home on the nightly news, and played in constant rotation as nightmares that haunted our sleep.

Stress escalates to trauma due to its level of importance (death of not only the self but of all humankind in the case of nuclear Armageddon), duration (the threat of death was present from my birth through adolescence), and uncertainty (we never knew when or if the end would come). For us Generation Xers and our Baby Boom parents, the bomb was part of our psychology and shared culture. I can still remember the relief I felt in late 1991 when the Soviet Union fell, and the people who had the power to kill us at any moment became our friends.

Over the last several months a tremendous amount of uncertainty has returned. Nuclear weapons reenter our consciousness as world leaders beat their chests using the threat of mass killings as proof of their masculinity. For some readers, this escalation might be the first time you thought about a missile wiping out life on earth, or at least destroying your city. For others, like myself, it brings back a sense of childhood fear and insecurities that trigger a level of anxiety that approaches a post-traumatic response.

While old fears surface once again, it is different this time. Of course, the geopolitics of the world appears very different at 42 years of age than it did at 12. The Reagan/Bush years dominated my childhood. While I was too young to understand the larger effect of the policies established in these years, I trusted our leaders as rational people who were fighting not only an “evil” enemy but also for the survival of our country and the rest of humanity. Growing up from age 6 to 18 under one consistent leadership regime provided some level of confidence in my young mind that we were the “good guys” and would not start Armageddon.

My fear today is a combination of the trauma of my youth and the belief that the all the leaders involved in the current conflicts with Russia and North Korea lack the strength and consistency of the leaders of my youth. Personal emotions and machismo add a level of uncertainty that makes predicting that either side acts with logic and compassion difficult. I’m scared.

As helpers, teachers, and leaders we are once again called to regulate our fear and frustration so we can focus on the emotional health of those we serve. While the current geopolitical environment is not the only trauma many of our clients, patients, and students are struggling to overcome, it is important for us to consider the possible effects of our present nuclear threat on our well-being as well as those we serve. People might seem more on edge; disagreements will escalate into arguments. Emotions might seem mismatched with what is going on in the environment.

Simply asking, “What is going on?” gives permission for people to talk about their worries and concerns. We should also be conscious of the media in our facilities and waiting rooms. Magazines, newspapers, or televisions turned to the news might add stress or trigger retraumatization even if the person does not realize that the news playing in the background triggered such a response. While it is impossible to shield people from our situation, we need to refocus our efforts in creating a safe sanctuary from the stress and trauma in our client’s and student’s worlds.

A final word. Make sure you take care of yourselves. I know that I’m not the only one whose childhood fear has once again risen into my adult consciousness. There is never a wrong time to refocus on our self-care and spend time thinking about the emotional health of our teams and organizations. Take care of yourselves my friends, no matter how dark the world gets, you continue to meet the darkness with light and healing.

2 responses to “The Armageddon Trigger Returns”