I hope everyone had a great New Year.

My 2016 ended on a sad note, with the death of my grandfather, Dorvin Rihm. I find it hard to mourn for a man that lived a great and independent life for 90 years, but damn, do I miss him tremendously. I wish you could have met him, because my grandfather was a great man.

The greatest among us do not care if others know they are special or talented. Instead of fame and fortune, they live lives of contentment while making an impact in their small corner of the world. It is a type of greatness you can only experience when you slow down long enough to sit quietly in their presence and feel their peace as your own. My grandfather was a great man, and the world would be a much better place if we had more like him.

I find it interesting how much we learn about someone after they have died. I’ve known my grandfather for over 40 years, but you learn something different about people when you go through the documentation of their lives. My grandmother, Dorvin’s wife Ruth, passed away a year and a half ago. Spending time with my mom, packing up the house they lived in for 60-plus years, was an emotional but deeply meaningful experience. The house had things that I had associated with my grandparents all my life, while the documents told a story, one my grandfather never told us growing up.

My mom asked me to go through my grandfather’s folders to find his discharge papers from World War II for the burial service. I discovered my great-grandparents’ birth certificates from the 1800s, and other documents that told the history of my family in Central Indiana. In this well-organized folder, I found a record of his battalion’s actions in the war, as well as documentation of his Purple Heart and Si 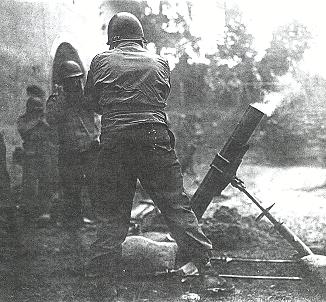 My grandfather served in a chemical mortar battalion in Europe. If you are like me and have no idea what a chemical mortar is, it turns out that these forces carried mortars that would not only fire high explosives, but could fire chemical and gas shells to be used in retaliation if the Nazis used similar weapons. They were attached to divisions of Army infantry for support, and soon became a highly-valued asset for striking stationary targets, such as machine gun nests and other larger artillery.

I asked some pretty stupid questions as a kid about my grandfather’s military service. “Did you kill anyone?” and “Did you ever beat up a Nazi?” are just two of the questions I wish so much that I could have taken back. If you bugged him enough, he would bring out his Purple Heart and talk about how his mortar hit a Nazi tank. In my research online about mortars, I learned how nearly impossible it was to hit a moving object like a tank.

As I flipped through the history of his battalion, I realized that his humility and probably traumatic memories of the war prevented him from telling the whole story. The pages of the book demonstrated how nothing ever went according to plan, not just for his battalion but in the overall war effort. From their launch towards the beaches of Normandy to finally ending the war Europe, we seemed to win the thing, not on organization, superior weapons, or numerical advantages; instead, his battalion and those infantry units they were attached to just had a ton of grit!

Many times, they did not know where they were or what they were going to confront. These mortars were a new addition to many infantry units, so they had to learn to coordinate efforts on the battlefield in real time. Plus, communication often meant men running through fields with cables while artillery was exploding around them. If the cables made it, then coordination was possible. If not, then everyone was working blind with high explosives!

Add to this chaos incidents of shells blowing up too early, bombers from the allied forces going down and dropping their payloads (I learned that if a bomber got hit, they dropped their bombs to lessen the weight, without considering where the bombs would land), and Nazi resistance at every turn. Death might not have been a daily occurrence, but it happened on a regular enough basis that I’m sure every day my grandfather woke up wondering if he would live to see the end of the day.

And yet, they marched on. They got up every day and either confronted the brutal realities of war, or the boredom and frustration of working through all the miscommunications and false starts, as the Allies embarked on one of the great military marches of history. As I flipped through page after page, my respect for my grandfather and those of his generation grew with every word. I have read books and watched documentaries on the war, but something about reading this story about my grandfather’s battalion, with his Purple Heart in my lap, changed the experience, and made it much more real.

I wonder how much of my grandfather’s quiet strength and humility came out of his war service. He never bragged about it. Instead, he volunteered for the Red Cross. He never drew attention to himself. Instead, he listened and got to know you better. He never had anything fancy or expensive. Instead, he found contentment with what he had.

I’m not sure I’ll ever be a great man like my grandfather, but I couldn’t have been luckier to have a role model to aspire to and to emulate.

If you lost anyone in 2016 that meant something special to you please feel free to share in the comment section.