“The price of doing the same old thing is far higher than the price of change.” – Bill Clinton

Most of this “mumbling” community works in human services, non-profits, clinics, schools, and libraries, with disadvantaged populations. We know you all have tons of extra time on your hands! How often do you see a change that would make life better for you, your team, or your client, but finding the time to change feels impossible? The thing is, Quality Improvement (QI) doesn’t have to be a massive multi-year project that sucks up all of your funding. It can be strategic and thoughtful, without taking ages and tons of resources to implement. Note, QI is significantly different than Quality Assurance (QA), which mostly focuses on monitoring rather than improving. Several reasons can motivate us to put energy towards QI projects, including to: 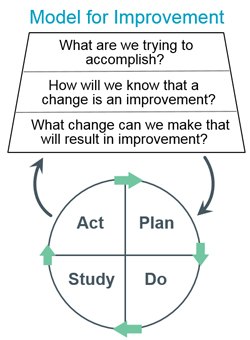 Who doesn’t want to do those things? One tool that can help us do so is The Model for Improvement, which is an elegantly simple model that can be conducted over a relatively short period of time, using minimal resources.

The Model for Improvement helps us focus efforts to:

Of course we know that improvements require change, however not all changes result in an improvement, so this next series of steps is really crucial! We have to test the proposed change! Typically, multiple tests are conducted until we see the kind of improvement we’re looking for. This is where the PDSA Cycle comes in. The PDSA Cycle is the portion of the Model for Improvement where you actually run the tests.

P: The first stage of the PDSA Cycle is the Plan, where the objective is stated, a prediction is made about what will happen and why, decisions are made about how the test will be conducted (who, what, where, when), and details will be delineated about how the test will be measured. The tests are meant to be small, simple & fast, as it is likely that you’ll run several of them to get where you want to be.

D: The next stage is to Do, here the test is actually carried out. Notice while testing whether any unexpected problems or issues arise – observing and documenting happens here.

S: Once the test is complete, it is time to Study the process and reflect on what was learned. What are the results of the test? Was the prediction correct?

A: The final step to complete PDSA Cycle is to Act. One of three actions will be made, we’ll choose to Adopt, Adapt, or Abandon. It’s unlikely after an initial test that the decision will go straight to adopting. Sometimes the test shows that a change really doesn’t improve the process at all, in which case the team might choose to abandon that idea and begin testing another. More often what we see is that the test should be adapted somehow based on the results and tested again. Then the PDSA Cycle begins again.

Running several short PDSA Cycles repeatedly while building on each with lessons learned and new adaptations, leads teams to efficiently find an improvement process that is tested and proven effective. The new and improved process can be implemented and everyone can be excited about the positive change!

Today we’ve just brushed the surface on the need for QI projects and The Model for Improvement, click here for more information, including templates and examples. This week in the comments section, we’d love to have you share an example of an improvement your team might like to focus on and/or a success you’ve experienced from conducting a QI project.