On a sunny 65 degree Saturday afternoon in Denver, it seemed like a great idea to take my two huge dogs for a run before the snow moved in overnight. Nothing different from our typical routine, and on a route we have taken many times.

In a split second, Moose saw something and cut directly in front of me, clipping my leg and causing me to fall. A 6’7”, 235-pound man in motion doesn’t just fall – he tumbles! Unfortunately, there was a metal fence to the right of me, and I fell head first into its sharp edge.

Being 6’7”, my head has taken a beating throughout the years. Between elbows in basketball, low basement ceilings, and snowboarding wipeouts, I have had more headaches and concussions than I like to think about. So this crash wasn’t the first head trauma I experienced, but there was one thing unusual about this time: BLOOD!

I felt the warmth spread across my head, a head that just a week earlier experienced a really bad haircut due to a self-imposed mistake, leading me to basically shave my head. At first, I was just thinking my run was over, until I reached over to grab the dog leashes and blood ran down my forehead, blinding me and covering my sunglasses. I soon realized this wasn’t just a little cut that might end my run early, but something much more series.

I quickly sat back down and soon found myself sitting in a pool of my own blood. Knowing I shouldn’t stand up, I did the only thing I could, and called out for help. It has been years since I’ve experienced a situation where I needed someone else and couldn’t handle a situation on my own. To make things scarier, I quickly realized that if I didn’t get help, I could lose enough blood that I could pass out or worse. 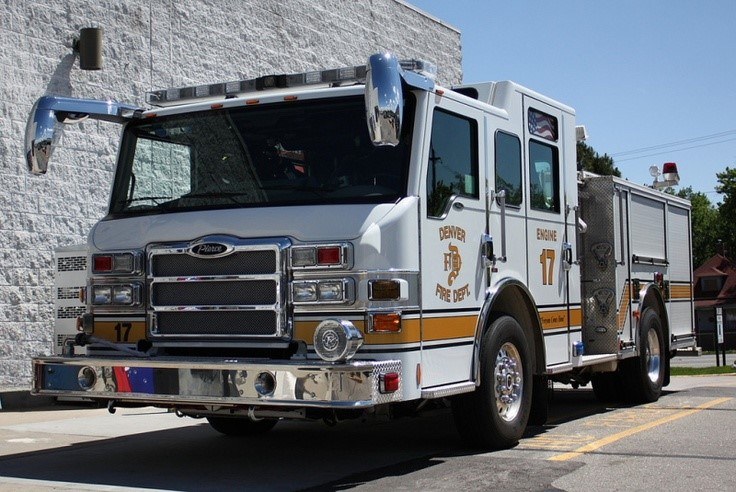 In my moment of vulnerability, my community came to my rescue. A nice man called 911, and an angel of a woman pulled over and gave me a towel to use to put pressure on my head. A moment later Fire Engine 17, from the station just across the street from my house, pulled up and started first aid. The sensation of knowing things would be okay because I was in someone else’s care was of amazing comfort. As the paramedics arrived, the Engine 17 crew even took my dogs home for me as I got an ambulance ride to Lutheran Medical Center in Wheat Ridge.

I was such a sight that the paramedics “cleaned me up,” so as not to traumatize anyone in the emergency room! This included two set of head bandages (as I bled through the first one), and hydrogen peroxide to get the blood off my hands, arms, legs, and face. I remember being worried about having huge cuts on my arms because my shirt was soaked through with blood – but it turned out that it was just all from the head wound.

The paramedics were great and got me into the ER right away. I was walked back and the physician assistant and nurses started to not only take care of my wounds, but take care of me as a person. The first step was to stitch shut the artery that had been cut, accounting for the blood. This needed done immediately, so there was no anesthetic or numbing involved.

I remember them asking the scaling question about my pain level before they worked to control the bleeding, and I answered 7 out of 10. During the next ten minutes, while they were working to close the artery, I experienced a level of pain that was well beyond anything I’d ever felt in the past. I had a new 10! That 7 is now a 4 in my book, as it felt like someone was turning a knife slowing into an already-existing wound.

I tried, with limited success, practicing mindfulness as a strategy to not hyperventilate. I was doing my best to survive the pain, and the nurse kept apologizing. I kept telling her it wasn’t her fault and that I appreciated her for doing the work. I guess it was great that we could have a very empathetic and compassionate conversation, both of us trying to get the other through the experience emotionally intact, but I really just wanted the pain to cease.

After the stitch from hell was finally in, I was immediately taken for a CT scan, which didn’t show any internal bleeding or fractures to the skull. This was a huge relief, because once the pain dropped back down, I started to fear the possibility of a traumatic brain injury. I know I’m still not out of the woods for this to be a possibility, but at least the CT scan and my symptoms seem to be indicating that I’m free from both concussions and TBI at this time!

My wife Sarah was at a performance of Dirty Dancing at the Denver Performing Arts Center, so she didn’t get my message until intermission. I had sent a couple of texts that tried to downplay the urgency of my situation, but knowing me as well as she does, she understood if I was in the ER, something serious was happening. As she rushed into the examining room, she found me still pretty covered in blood, but smiling.

I was glad that I had been cleaned up three or four times at this point and so relieved not to be in pain anymore (the PA had numbed my head at this point) that the smile came easy. Seeing my wife, I knew everything was going to be okay. This feeling comforted me, even knowing I had staples and stitches left to go. My bad haircut was probably a blessing in disguise, as it made it easier for the PA to put in 25 staples and 12 stitches, which were painful but, compared to my earlier experiences, easier to take.

In recent months, I have taken a moment at the beginning of each of my trauma trainings to discuss the different roles we play. Sometimes we are the helper and sometimes we are the client/patient, and while roles help us discuss key concepts, it is critical to remember that we are all people struggling to find our meaning and our best selves in this world.

Little did I know that just a few hours after saying these words to a great group of helpers in Michigan, I would be the patient in an Emergency Room in Colorado, not able to take care of myself, and literally putting my life in the hands of professionals and community members that I had never met and may never have a chance to thank. I don’t think I would call my experiencing traumatizing, though like my TBI worries, it is probably too early to cross anything off the list.

What I do know is that the compassion, concern, and professionalism of everyone I met throughout my ordeal reinforced the importance of all of us in the lives of those we serve. No one really needed to care about me to provide me care, but the fact that everyone did care likely made a possible traumatic event into just a crappy afternoon. The fact that my Coldspring Center family is so understanding and compassionate makes a slow return to work possible, and the sense of care continues in both my personal and professional worlds.

As I was administering my own concussion protocol and trauma first aid throughout the process, I did have a thought…at least there might be a blog post in here somewhere! And so I guess anything I get to share with my valued community isn’t that terrible after all. Thanks for reading!

51 responses to “A Painful Reminder”