The Genetics of Poverty

Most of us would probably agree that the American Dream of becoming anything you want is more available to those from certain groups, and less available to others.  What if a deeper look into the science demonstrated clearly that our society is structured to allow some to express their genetic potential while suppressing this potential in others?  Would we stand for a society like that in Aldous Huxley’s Brave New World? In Huxley’s classic some people born into certain classes are allowed to express their full genetic potential and live intellectually and socially simulating lives. Those born into other classes had their genes altered as to not allow full expression of their potential, sentencing them to a life of stress, poverty, and little or no access to improving their situation?

The practice of eugenics, or strategically improving the genetics of a population, is usually viewed in a negative light due to past nightmares, such as those implemented by the Nazis, or future visions, such as Huxley’s society.  How different is a society that systematically keeps a good portion of its population in situations that prevent, or greatly prohibit, these groups from expressing the genes needed to succeed in that same society?  What if this same society put another group of people in a position to thrive genetically, generation after generation, and whose only limitation is their own ambition?

One of my favorite shows right now is Through the Wormhole, on the Science Channel.  Please take a moment to view this short clip from a recent episode, Is Poverty Genetic?: http://www.sciencechannel.com/tv-shows/through-the-wormhole/videos/is-poverty-genetic.htmh.

Many of you have heard me talk about epigenetics in my trainings, where the environment tells our DNA which specific proteins to produce. These proteins then create cells which, on a macro level, create our physical and personality traits.  Certain aspects of our society, such as homelessness, trauma, war, and poverty, tell our DNA which genes to activate that will help us thrive in that environment.  However, creating traits to thrive in extreme poverty or abusive situations sets the person up to fail in “normal” society.  Here is another short clip from Through the Wormhole that shows the impact of this epigenetic reality: http://www.sciencechannel.com/tv-shows/through-the-wormhole/videos/physical-differences-between-brains-of-rich-and-poor-kids.htm.

How does a society that states that everyone has a chance to be anything they want as long as they work hard enough internalize the fact that it systematically maintains environments for those in the lower and mid-classes that limits their opportunities to reach their potential?  While at the same time sets up a different environment that gives the powerful unlimited possibilities? If success is determined primarily by the socioeconomic class we are born into, then has the American Dream been a lie all along?  Here is where another slide from Dan Rabbitt’s Spare Some Social Change? Workshop demonstrates how our policies not only create the problem, but are making it worse over time. 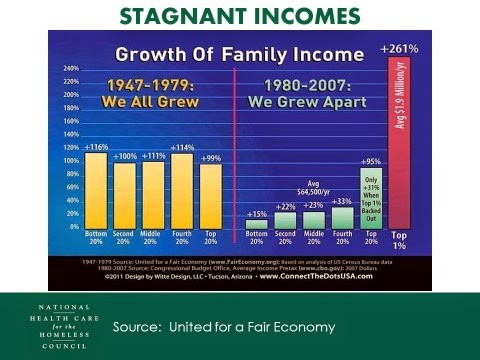 In part, the rich develop brains that thrive on being rich, and the rest of us develop brains that help us survive and thrive in our environments – keeping us all in our places, or at least beyond the reach of the rapidly growing wealth of the top 20%, and especially the top 1%.  Not only is the neurobiological deck stacked in favor of the rich, so are the educational and social systems designed so that one group continues to gain more power, while the rest are denied equal opportunity.  Not sure about you, but learning the scientific fact that being born middle class limited my genetic potential from being expressed fully really ticks me off, and I’m well-off compared to those born into the lower classes.

Growing up, I was told that America was the land of opportunity, where we threw off the chains of aristocracy and serfdom to give EVERYONE the ability to create the life they wanted, as long as they were willing to work hard enough.  Living in a society where this is only true for a small segment of people seems more like the genetic situation in Brave New World than a land of opportunity.  Think of the brainpower and innovation America loses because it suppresses the development of the majority of its population.  We are all born with the same potential, and society decides who gets to realize that potential and who doesn’t have this opportunity.

Let’s now look at a couple of exceptions that are often put forth to justify our social and economic policies.  First, is the power of social connections in reclaiming potential.  Studies have shown that if someone positive comes into our lives and exposes us to different experiences and ways of thinking, it opens a path to a vastly different future.  I found this great article that explains the science behind the power of positive role models, family members, helpers, and teachers (http://www.psmag.com/navigation/health-and-behavior/the-social-life-of-genes-64616/?src=longreads).

The next exception is the miracle.  It is the person that, despite their situation, rises above poverty, abuse, and environment, and becomes successful by societal standards.  We know that many people in this group are also in the first group as well.  Let’s say we could round up a few people raised with no positive role model relationships, who grew up in a stressed, dysfunctional, and/or abusive home, attended school within a failing educational system, and who were able to pull themselves into the 20% of income earners.  Per the science, this is nothing short of a miracle.  I believe that we should create policies and systems based on giving everyone opportunity at birth, and where it does not require miracles, but hard work, to achieve success.

I think it is interesting when the media uses classism to describe how the wealthy are “scapegoated” for the problems of the poor and shrinking middle-class.  The term is used much less to describe the fact that, though born with equal potential, the poor and middle-class are robbed of the opportunity to reach their genetic potential.  Our prisons are filled with potential geniuses and leaders who sacrificed this part of their brain development in order to survive impoverished and traumatic situations.  It is becoming more clear that the amount of choice and personal freedom available to someone is not limited by that person’s drive and motivation, but by society.

Now, imagine a society that realizes the untapped potential of this science.  Investing in historically impoverished areas and groups would flood society with healthy and engaged citizens who, through realizing their potential, would greatly contribute to the society and its future well-being.  This is yet another example of how a short-term investment could bring equality and fairness to all people. Success would be determined by hard work, motivation, and a little luck – not which social class someone is born into.

As helpers, we can play a key role for our clients who are suffering in this reality.  We can be the positive person who helps them see the path forward.  Helpers work in the small margin between a classist system and the psychological impact this system has on the individual client.  We provide environments for social, emotional, cognitive, spiritual, and physical healing, allowing new genes to be expressed and new traits to evolve, on the foundation of the resiliency our clients have developed to survive.

We play a powerful role in our clients’ lives, and, as we understand the science behind their struggles, it is important that we also play an equally powerful role as advocates in our society.  Until we are able to change the class-based neurobiological reality in America, people, families, and communities will continue to struggle to survive.  We, better than anyone, know the power that lies within our clients and their experiences. Imagine a society dedicated to helping them achieve this potential.

My challenge to you this week is to share this information with at least one person who you think would be receptive to its message.  Have a conversation, forward this blog or the videos, or figure out your own way to get this important message out there.  So many people who care about our clients do not have this knowledge yet.  Let’s start building a critical mass, not with those that will argue with us and miss the message in the research, but with those that agree and are invested in the success of our communities.  There will be a time to confront opposing viewpoints, but at the present, we need to build consensus within our own ranks.

2 responses to “The Genetics of Poverty”