The View from Baltimore

The communities we work in are in pain. Poverty, crime, homelessness, insane rates of incarceration, discrimination/racism, and increasing income discrepancy have added fuel to this pain and growing sense of hopelessness. In many communities, police violence is serving as a spark, igniting this anger and pain into violence. My good friend and someone who has taught me a great deal about advocacy over the years, Barbara DiPietro, witnessed this firsthand over the weekend in Baltimore during the Freddie Gray march.

I’m honored for a second year to present with Barbara at the National Health Care for the Homeless Council’s Conference, on using Motivational Interviewing for Advocacy with Policymakers. My relationship with Barbara has helped me find my own voice as an advocate and change agent, and her experience and insight drives home how energy for change can be a difficult thing to organize and manage effectively.

Her experience, story, and expertise puts one community’s frustration and pain in perspective.  I will let her take it from here.   Matt

“A riot is the language of the unheard.”

This time, it’s Baltimore. Last time, it was North Charleston. The times before, it was Ferguson, New York City, Sanford, and Albuquerque (just to name a few). Where next? In each place, we saw a broad public response to those tragedies that included demonstrations and protests.

On Saturday, April 25, my husband and I joined the march through Baltimore in solidarity with a diverse crowd wanting justice for Freddie Gray and demanding larger changes. The march went from the public housing project where Freddie Gray was arrested to City Hall, a couple miles away—going past Orioles Stadium and tourist-filled Inner Harbor.  There were 1,500 people gathered at a rally on the City Hall lawn—and everyone was ready for action.

Unfortunately, this was the point where things seemed to lose focus. First let me say that the poor speaker system really was a barrier to hearing much that was being said, even though I was standing close to the front. But second—and more important—was that the rally seemed poorly organized, with no cohesive theme, no specific call for action, and no plan for what the crowd should do next. There were a few speeches (though it was difficult to tell who was actually speaking amid the large crowd assembled on the dais), but they did not provide any direction, either in the general public policy sense or in the right-here-right-now-at-6:00 sense. A number of those speaking seemed not to have expected to speak, or to have prepared their comments. It was, let’s say, not riveting. Those around us started to get impatient and you could feel people getting bored, but they were still ramped up. 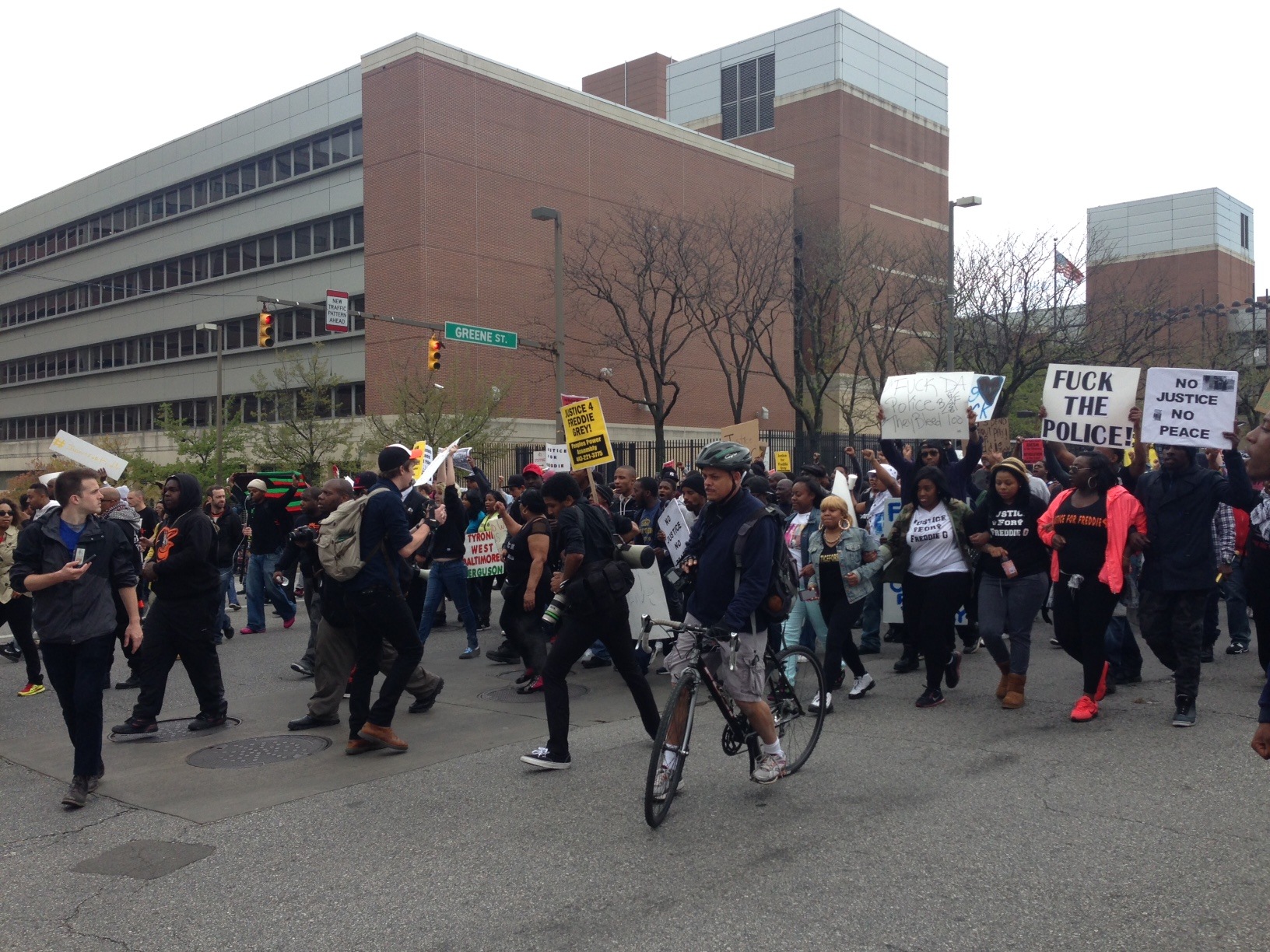 So what happens at this point for the people holding signs that say “Fuck the Police” and “Police are Slave Catchers”? Or those who just spent the past hour walking through Baltimore chanting “shut the city down”? That’s a catchy slogan, but it’s vague and subject to diverse interpretations. It occurred to me there in the moment what a tremendous missed opportunity for laying out a compelling list of specific demands. The rally could have addressed the Freddie Gray case specifically, the larger issues of criminal justice and police-community relations, and the systemic issues of affordable and decent housing, livable wages & paid leave, quality K-12 education, affordable day care & higher education, an equitable health care program, and long-entrenched structural racism.

At the very least, a circulated petition? A list of our elected officials and ways to contact them? Alas, no.

It was clear then and it is still very clear after another week of protests and demonstrations (and worse) that there is a great deal of energy in our communities, but very few productive ways to direct this energy toward actual change. These observations are not intended to denigrate the aims of the event’s organizers, nor to discourage grassroots-driven action and public expressions of outrage over systemic injustices. Quite the contrary—these are vitally important. But I saw opportunities to have maximized this event.

As more and more active conversations and events are taking place around the country, there are roles for service providers to channel the energy of our clients and fellow colleagues, provide space to process our ideas and desire for action, and help keep a focus on the broader solutions needed to realize public policy changes.

In 1968, the Reverend Martin Luther King, Jr said that “a riot is the language of the unheard.” Based on the 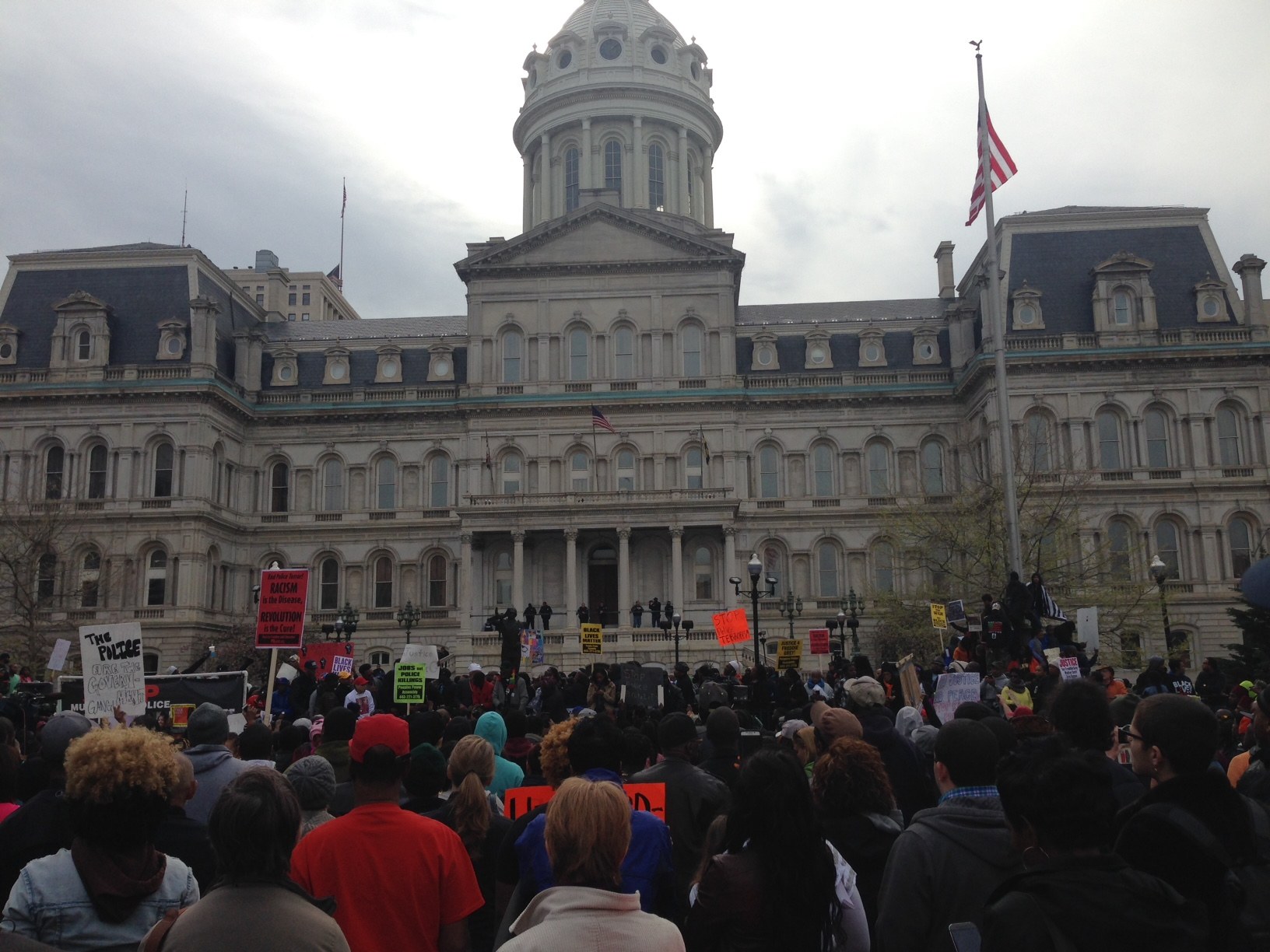 countless news interviews, articles, blogs, photos, videos and other media coming out of Baltimore in the past couple of weeks that feature members of our community angry over not feeling valued or heard, it comes as no surprise that a handful of people channeled their anger in ways that aren’t helpful to the larger conversations and solutions. But what also comes as no surprise is the much larger number of people who are taking to the streets to mediate, intervene, sing, dance, organize, clean up, and encourage others to join in the struggle for better things. It’s critical we remember that those throwing rocks are not our enemies, and while we may disagree about tactics, we must remain united against systems of oppression that have created the current environment.

I hope—I pray—that we are at a turning point in our country. Yes, revolution looks messy when it starts to form. It’s not always well-organized, or controlled, or eloquent. But it is righteous and real. Our challenge is to keep with it, to stand tall, to bear witness, to participate, to turn out, to encourage others to march, to speak truth to power, to organize, and to create new spaces (or rededicate existing ones) for building this movement together with our clients and ourselves.

Thank you, Matt, for allowing me this space to share my observations and hopes for better things to come.

4 responses to “The View from Baltimore”